Southwark Council is destroying acres of woods and graves

to maintain its burial service while

discriminating against most Muslims

FACT: Southwark’s Muslim ‘segregated space’ in Nunhead Cemetery is just a ‘space’ and is not a Muslim cemetery fit for most Muslims.

FACT: Southwark knows this is discriminatory

The photo opposite is of ‘new’ burial grounds developed in Camberwell Old Cemetery created in 2012 on top of thousands of graves. Southwark generously says to its Muslim residents that “any residents, irrespective of any religious preferences, are welcome to use our cemeteries”. 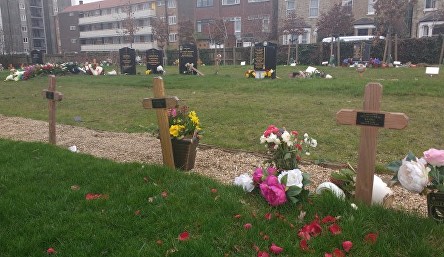 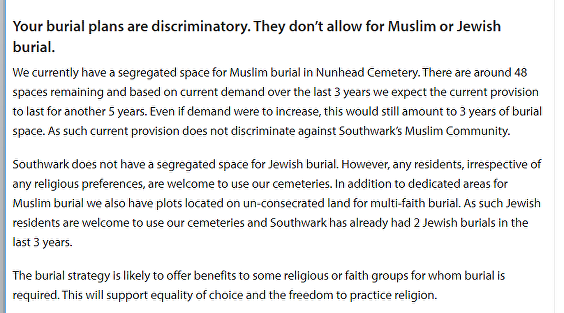 Southwark writes in its FAQs

“We currently have a segregated space for Muslim burial in Nunhead Cemetery. There are around 48 spaces remaining and based on current demand over the last 3 years we expect the current provision to last for another 5 years. Even if demand were to increase, this would still amount to 3 years of burial space. As such current provision does not discriminate against Southwark’s Muslim Community.”

Why this shows discrimination:

Southwark provides burial for less than 10 Muslims a year. Only Ten.

This is a borough with at least 30,000 Muslim residents. An estimated 270 Muslims need burial each year. Muslims make up perhaps 40 percent of the burial demand for the borough, one of the largest communities requiring burial by faith. And Southwark buries only 10.

Where are the remaining 260 buried? Does Southwark know about the other 96%? They know that the majority of Southwark’s Muslim residents needing burial are laid to rest outside the borough.

Southwark writes in its FAQs:

‘However, any residents, irrespective of any religious preferences, are welcome to use our cemeteries. In addition to dedicated areas for Muslim burial we also have plots located on un-consecrated land for multi-faith burial.’

Why this shows discrimination:

Yes, Muslims are welcome to use Southwark’s cemeteries, providing they follow what is English burial practices. It is like a restaurant advertising that ‘Anyone is welcome to eat our roast chicken, even vegetarians.’

Southwark has not done a Burial Needs Assessment for the borough. Still, they would have to know that the burial it provides serves only a small percentage of their Muslim residents. (See our Press Release of 25th November 2017 ‘Religious discrimination in burial service confirmed by Multifaith leaders – yet Southwark does nothing’.)

Similarly, the Council does not provide dedicated burial for Orthodox Jews. 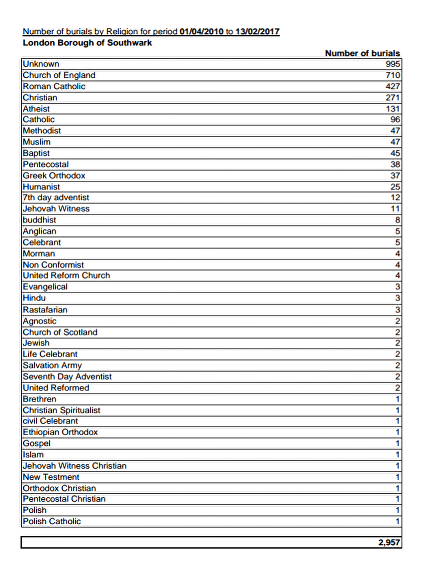 Photo: Gardens of Peace Muslim burials grounds in Hainault, Ilford, where many Southwark Muslims are buried. 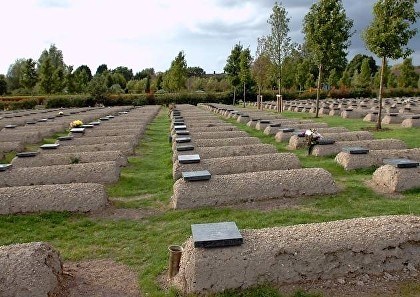 Why should a community have to fight for its right to be included?

Multifaith leaders have confirmed that Southwark’s burial service discriminates against most Muslim residents by forcing them to rely on private cemeteries out of the borough while Southwark caters to Christian and athiest residents.

Imam Bilo Barrie of Peckham BECA Mosque, Mr Musharraf Chaudhury, Chair of the Southwark Multifaith Forum, and Habiba Taslim of Haji Taslim Funerals all agreed that Southwark’s burial service does not provide for the majority of Muslim residents. Mr Chaudhury said: “I think most people almost come to realise that there are no facilities for burial in Southwark so they make provision elsewhere.” Habiba Taslim wrote: “If our families want a non-coffin burial we direct them to Kemnal Park.”

Mr Chaudhury added “I guess we all in life want to be treated equally.”

Why does the Save Southwark Wood Campaign of Friends of Camberwell Cemeteries care about discrimination in Southwark’s burial provision?

Southwark say they must cut down trees and destroy the memorials of the dead to create new burial space for local residents, locally. The truth is that the space isn’t for all local residents, only some. Discrimination is only one reason why Southwark should declare these cemeteries memorial park nature reserves. If the people of the borough want to provide burial that all its residents can use they can purchase land elsewhere 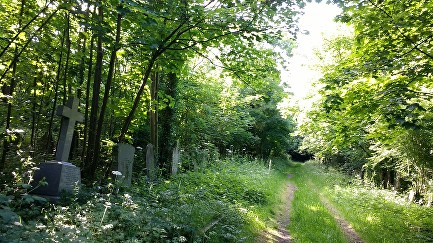 Above: What Save Southwark Wood is fighting for – Acres of beautiful and historic cemetery woods.