Buzzfeed has just reported that Councils, including Southwark, are “dismantling paupers’ graves in historic cemeteries to sell off private burial spaces for thousands of pounds to people who want to be buried in the inner city.”

Journalist Hannah al Othman’s article reveals how Southwark has removed people’s gravestones and buried over the dead and next intend to dig up thousands of private graves to sell as ‘new’ burial plots.

“We found out that we had lots of family members buried where they are going to dig up. My great-grandparents, great-uncles, great-aunts. Although they’re within their legal rights of what they can do, the point is there’s a lot of people who don’t want their relatives to be tampered with.”

The ‘new’ burial plots won’t even provide for borough burial need as they exclude at least a third of residents seeking burial.

The Friends of Camberwell Cemeteries are fighting to save the cemeteries as nature reserves with respect for the dead and woods and nature for the living.

Below: Local resident Rose Ives and mother Tina Kirby at the grave site of one of their relatives in a public grave now beneath a Holly tree on One Tree Hill, Camberwell New Cemetery Below: Southwark removed memorials of the poor in hostoric Camberwell Old Cemetery to sell ‘new’ plots over their graves. 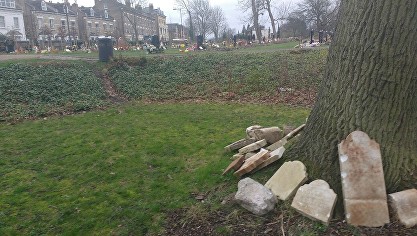